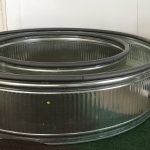 In mid April, just two weeks prior to the AKC USA AWC Team Tryouts, Frodo and I went from being super prepared and ready to rock and roll to…rehab. Frodo suffered a traumatic tear of his CCL on a Thursday, April 13, and had a TPLO Friday, April 14.

I live way out in the country, and I’m not in to driving in to downtown anywhere to get dogs to an underwater treadmill, but I do recognize the importance and benefits to hydrotherapy, whether it be ice packs, heat packs, swimming, or walking in water (cold or warm).

If you’re curious as to the rehab protocol I followed with Frodo, it’s a combination of these two:

Top Dog Health – TPLO Guide – This guide is a free download, and I also get weekly emails with videos of each exercise. I’m pretty impressed with how thorough it is. It’s fairly conservative, and I’ve been moving a little faster than this guide spells out, but then again, Frodo was in top condition prior to the injury, not overweight, and I have access to a lot of fitness equipment and information – this guide as well as the next one is clearly aimed at a pet audience. I’m sure that veterinary professionals and rehab professionals are cringing right now, but I’m ok with that – and for sure you can reserve the right to blame my use of this and other DIY resources on any rehab failures we may encounter 🙂

MedVetForPets – TPLO Guide – I can’t remember how I found this one, but it’s also pretty thorough, and includes more exercises with a little faster progression. I like that I can look at the two together and get a rough idea of how to proceed.

That brings us to Hillbilly Hydrotherapy. With Frodo, since there was no previous ligament disease, and it was a traumatic event, his prognosis for healing is excellent. Getting back to full activity is mostly a matter of building back muscle, once the Tibia has healed. And, building back muscle to the point we were at prior to the incident will be determined by how much muscle wasting occurs while that Tibia is healing. So, I knew I wanted to get him walking in the water as soon as I could. I knew I wanted to be able to do it without driving an hour each way multiple times a week, daily if possible. With Solar, who had a soft tissue injury in 2014, I just used an inflatable above ground pool and walked in circles with him, but I didn’t like how he could swing his rear out and pivot, rather than tracking with front and rear together.

When I saw this set up posted by somebody on FB, I knew I wanted to build something like it myself, with a few modifications. Here’s my setup: 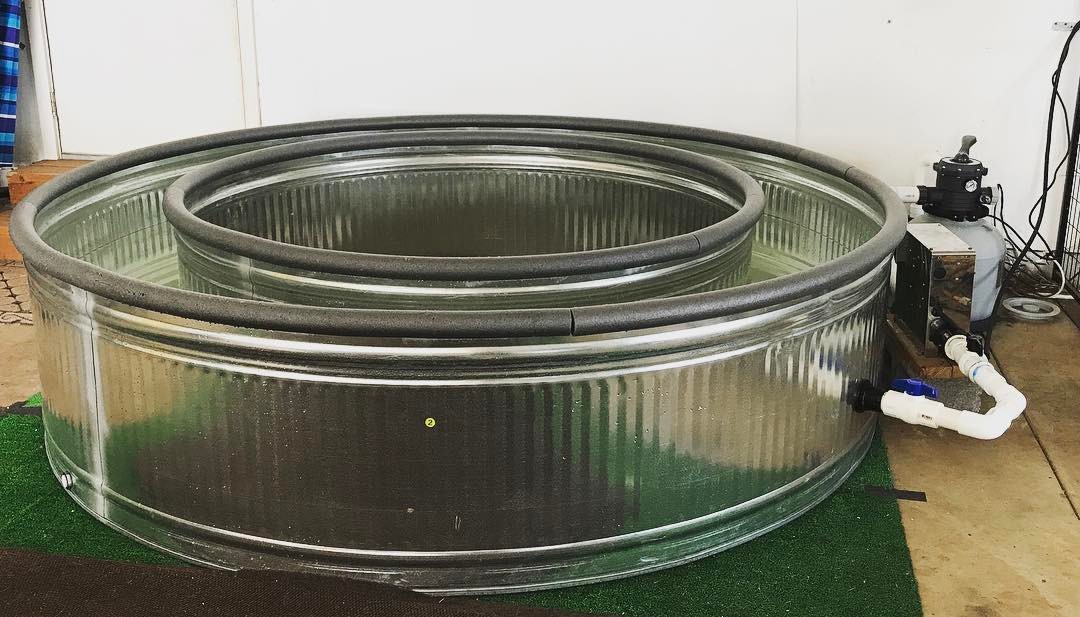 First, I purchased two stock tanks at my local feed store. One is an 8′ tank, and one is a 6′ tank. When these tanks are shipped from the manufacturer to the store, they’re nested. So, not all 8′ tanks are actually 8′ in diameter, and not all 6′ tanks are actually 6′ in diameter. I asked for a large 8′ tank, and a small 6′ tank, and had both delivered to the house. The two together, plus shipping, set me back ~$580USD. I purchased some pipe insulation at Home Depot to put on the rims of both tanks, so that nobody would whack themselves (me or the dogs) on the edges.

I drilled two holes in the tank, using a Milwaukie Hole Dozer, 2-3/8″ in size. 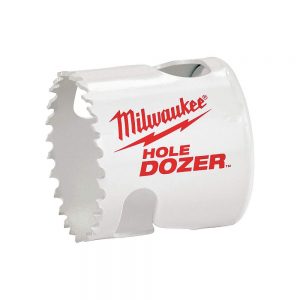 2-3/8″ Hole Dozer – purchased at Home Depot, along with the appropriate bit/base.

Then, I fitted the holes with bulkhead fittings, purchased at Amazon. The fittings were also caulked with marine sealant, purchased at Home Depot. 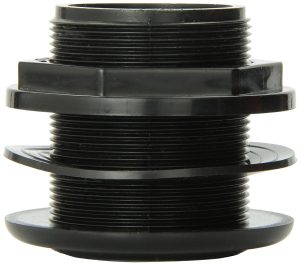 Bulkhead fittings (2) for tank inlet and outlet. This size will work with 1.5″ PVC

Once the holes were drilled in the outer tank, I made sure that the inner tank was centered nicely, leaving a ring about 15″ wide, all the way around. I weighted the inner tank down with some pavers I had laying around, and then caulked the junction of the inner and outer tank with marine caulk & sealant.

Once the caulk cured, I poured two gallons of a substance called FlexSeal in the ring where the dogs would walk. This not only provided a rubber surface to help keep them from slipping, but it also further served to seal the junction between the inner and the outer tanks. I don’t want water seeping under the inner tank, which might make it pop up and float! All the water should be contained to the ring where the dogs will walk, leaving the inner tank dry for ME to walk in!

It took a few days for the FlexSeal to cure, but by then, I had my two tanks ready to be plumbed and connected to the filter/pump assembly, and the heater.

For a heater, I am using a spa heater that a friend sold to me, but you could easily use something like this:

A 110V spa heater – 220V will heat the water faster but will require a special circuit.

We didn’t have a dedicated circuit for a 220V heater, so we’re using a 110V heater for now, til we bring out an electrician to update the circuit in the garage (yes, this is in my garage). It doesn’t get the water HOT, just 65-70 degrees, which is still pretty good, and frankly, as the weather gets warmer, I don’t think the dogs will mind cool water.

The pump I’m using is for an Intex pool – it’s a pump/sand filter combination. Also purchased off Amazon. 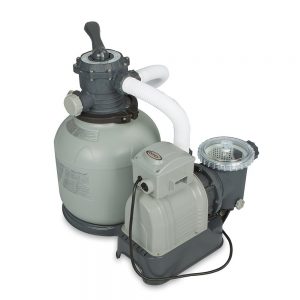 Intex pumps come with their own flexible tubing, which is stupid. The piece of tubing connecting the pump and the filter I left, but since I wanted to use 1.5″ PVC for the connection from the tank to the pump, and then from the filter to the heater, and then from the heater back to the tank, I had to do a little converting to get the intex pipe converted over to 1.5″ pipe. Thank you, internet:

There are ball valve joints on the outside of each of the bulkhead fittings, so I can close things off if I need to drain the tank or disconnect anything. There’s also a 90-degree elbow on the inside of the bulkhead where the water comes back in to the tank, and it’s not glued – this way I can rotate it to change the direction of the current in the tank, depending on which direction the dogs are walking: 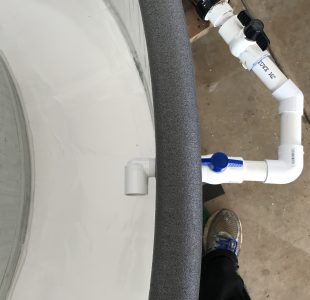 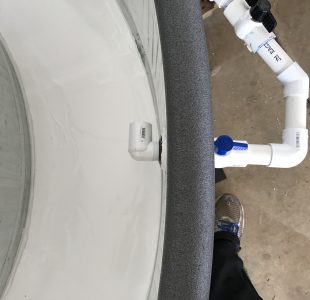 So, there you have it, Hillbilly Hydrotherapy. Since my tank is against a wall in my garage, there’s a backsplash between it and the wall to keep water out of the outlet on said wall. It’s just a 4×8′ piece of material from Home Depot that’s flexible and designed for bathrooms or something like that. I just wandered til I found what I wanted. Nope, that’s a lie. George had it laying around for another project, and I appropriated it.

I do have to lift Frodo in and out of the tank, but he doesn’t really seem to mind so much. I suppose I could get even fancier and make a ramp of some sort, or even a door, if I wanted to pump all the water out and in each time. Lifting isn’t too bad, though. Here it is, Hillbilly Hydrotherapy in action:

For now, I’m planning on leaving it set up in my garage indefinitely. It doesn’t take up any usable space, really, and it’s a heck of a lot better than driving anywhere. (UPDATE: As of now, 2019, my stock tanks are sitting outside as defunct raincatchers, and I hope I never need them again!).

Altogether, this cost me less than $1000. And, you know, if I do take it apart, I’ve got a couple of tanks that I can turn in to ponds, or flower pots or something…