The Two Toy Game – Get The Live Toy 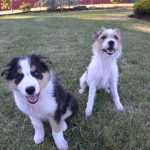 Last week was an amazing week here at Clear Mind Agility, because it was Summer Camp Week. I’ll write more about that later, separately, at www.daisypeel.com, where my ramblings on life in general reside. This is all about Chispa! No real “formal” training happened, but she did get passed around, a LOT. Between camp duties, teaching, and such, it often fell to my trusty helpers to make sure Chispa was cared for during the day, and she was a champ being passed around. My trusty helpers were champs too; Chispa knows not to chew on me, but each arm is a new lesson to be learned. 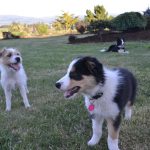 Axel, Chispa, and Juno, hanging out 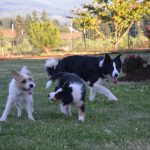 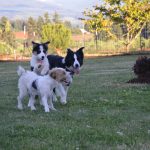 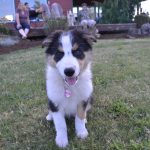 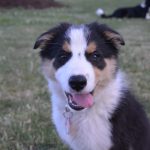 Chispa also got to play a little in front of a crowd, which was great. On the first evening of camp, Sandy Rowan, a wonderful instructor who lives just down the road, gave a presentation on motivation and drive – timely, as the instructors and campers were then able to refer to the material all through camp to keep dogs going til the last day. In any case, Chispa got to play with Sandy as a demo dog, in front of a crowd of people, while I watched on. It was a great opportunity for me to see how she’d function in front of a group of onlookers, and, after all, isn’t that what agility (at the competitions, anyway), is all about?

I do think that it’s important to take your show on the road, as it were, with your puppy. Even if “the show” is sitting for a cookie, or a very small recall, it’s important, in my mind, to start practicing the PERFORMANCE aspect of those behaviors as a team, in front of others. And, as Chispa’s future undoubtedly includes performing in front of onlookers in both a teaching/demo and competitive environment, it was great to see that she seemed to really revel in the whole process of being a demo dog (I think the term was “she’s such a HAM”). Sadly, I was too busy enjoying watching to get any photos or video, but Chispa was clearly reveling in the attention, AND, to my delight, even seemed to enjoy and feed off of the crowd laughter when she did something “naughty”. I’m not sure if that sense of “got game” can TRULY be trained, personally. We (dogs and people) can learn to enjoy the game, and to cope with the obstacles that are put in our path when we choose to step in to the arena and perform in front of a crowd, but that love of the game, a love of showboating? I’m not sure that can be taught. Maybe, but I was happy to see that Chispa appeared to enjoy hamming it up for a crowd with Sandy.

When things finally settled down after camp, I got busy on shifting focus back toward some daily training with Chispa, as well as her puppy booster shot (which she didn’t even flinch for, but then again, she was nose deep in a kong filled with cream cheese). So, first things first…

Time to make some toys… 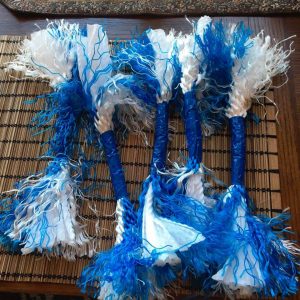 If you're not seeing anything more in this post, it's because you're either not a premium subscriber, or you are, but you aren't logged in, OR, you haven't been a subscriber LONG enough to see this content quite yet. Become a premium member to get access to handouts, videos, and a discussion forum for this blog series!