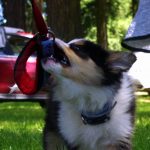 This weekend the weather is HOT HOT HOT. Puppies are somewhat crepuscular by nature, meaning, they tend to be most active during morning and evening twilight. So, while that’s great for during the day when other chores and work needs to be done, it’s a little bit tricky when in the evening, you’re completely wiped from the heat, and your puppy, having slept all day, wants to PLAAAAAAAY, and then in the morning, when you just. want. to. sleep. past. 5am….your puppy wants to PLAAAAAAY.

Even so, Chispa is terribly cute, so it’s not so bad. But yesterday, after getting home from a local AKC show where we were out in the heat all day, I kind of just wanted to lay like a vegetable. The dogs were crated in the shade and Chispa slept most of the day at the show, so she had other ideas. 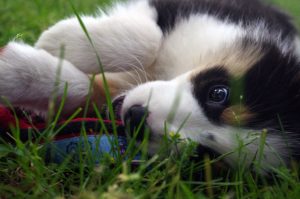 Chispa is incredibly mouthy. She wants EVERYTHING in her mouth. All the time. It’s cute, but at the same time, I want to let her know that there are some things (namely my body parts and the clothing that covers them) that just aren’t acceptable for her to put her teeth on.

Cute, yes. But ultimately not the most productive pastime for a puppy.

The foot biting is a little out of control at the moment. She’s getting better, to be sure, but she forgets, and needs to be reminded frequently, that this is not ok. How do I do this with her? Well…

It gets tricky when I am, say, trying to cook, or have something in my hands such that I can’t see her coming. In those cases, its important to remember that OH MY GOD THAT HURTS but DON’T PULL AWAY because that is what prey would do and that makes it even more GAME ON for her. So, as quickly as possible, I’ll get rid of what is in my arms and get in to the steps above. I’m not ashamed to admit that there are times when I just have to get things done, and she needs to be loose, so I have some toys on ropes and such that are long enough that I can loop one end over my arm, and have the other end drag on the ground while I walk around, to give her something OTHER than my feet to latch on to. Often, a leash is handy for this. 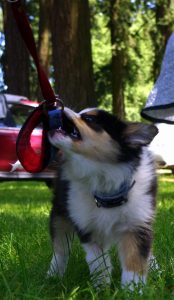 Yelling is useless. Sure, screaming like a hurt puppy has some effect, but I’m not a puppy and she knows it. She’s not in the least bit noise sensitive, but my other dogs ARE. Raising my voice, aside from being rather ineffectual for HER, has the effect on the other dogs of sending them to their respective hidey holes, Frodo in particular. Solar has taken an approach similar to mine; he just puts his mouth on hers when she gets bitey, holds it a bit, and then lets go. Or, he pins her momentarily with a front paw. Gently, but firmly, and when he lets go, the play resumes in a gentler fashion. Yep, Solar and Chispa are playing, and it’s the cutest damned thing ever. And I’m buying a dSLR today off Craigslist so I can capture these things; my phone just ends up taking pictures where it looks like there’s a blurry puppy poltergeist in the frame, if anything MAKES it into the frame.

What my feet often see coming at them

Once I get my camera, you can expect to see more pictures and videos!

A couple of days ago, we started playing ‘Red light, green light’. What’s that, you ask? Premium subscribers, read on…