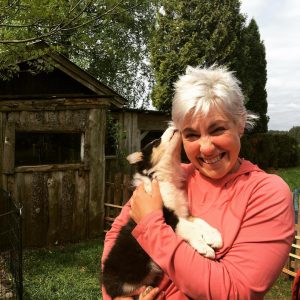 Chispa and Daisy, meeting for the first time in Bavaria

And so, last week, after being home for just one day after my trip with Frodo to the World Agility Open in the UK (which followed hot on the heels of the AKC Agility World Championships Team Tryouts), I got back on a plane, headed to Amsterdam, where I met up with my good friend Anna. Together, we drove all the way to Southern Germany, just a holler away from Austria, picked up little Chispa, and then drove all the way back to The Netherlands, where I caught a flight back home.

I’m totally in love with this puppy. I had only JUST started thinking about another puppy – I mean, after the journey Frodo and I have had to get to where we are now, we are at such an incredible place right now, why bother with a puppy? Also, what about Chipper? Ah…Chipper. I miss that boy. He lives with my ex-husband now, and is a wonderful companion to him. So, with Frodo about to turn four (next month), I started thinking.

And, just about as soon as I started thinking, it was as though the universe provided. I’d seen a half sibling to Chispa (same mother) last year in Brazil at the 2014 Americas Y Caribe, handled by a member of the AyC Germany Team. She was exceptional in her LACK of “flash”. There was no one thing that made me say WOW. Rather, she was fluid, efficient, looked at ease with the jumping, and just gave an overall impression of being an incredible teammate. Then, just a month or so later, I met ANOTHER half sibling (same mother) at the WAO in The Netherlands, again, competing for Team Germany. And again, it was the same thing. I never thought there was one single WOW thing. But overall? Wow. The dogs could quietly run a course and you’d never know how fast they were until you looked at the time, and just…wow. And then, yet another dog (same mother) floated to my attention having won a round at the European Open in the summer of 2015.

Does all of this ensure that Chispa will be a winner? Of course not. But there was just something about the ease with which these dogs were moving around the course that made me think, “here is a teammate who I would like to work with.” And so, when Anna contacted me and told me it was a long shot but MAYBE if I was interested she’d inquire, I said HECK YES.

It was such an easy decision, and also, such a BIG one. I spent a lot of time on the flight over to Amsterdam AND on the way back, and every moment in between (and still!) thinking a lot about bonding and attachment theory. If you’re not familiar with the concepts of bonding and attachment theory, read up a bit. It’s worth it, and while the research has been done mostly on children and struggling couples, it resonates for me with our canine partners as well. How would I ensure that right off the bat, I bonded with Chispa? Would there be a connection? Well, she’s just a puppy, really, it’s up to ME to have an open heart and to radiate a sense of “I will take care of you” to her. Obviously she doesn’t understand English (or German!). So, I resolved to just BE open to that attachment. Don’t look to see if she’s THE ONE. Of course she is!

Resolved to make the attachment my first priority, I also wanted to take a page from current trends in bonding with newborn infants, which also comes from the studies on bonding and attachment theory. I wanted that puppy to be with me, TOUCHING me, as much as possible. So, during the full day drive from Bavaria back to Anna’s apartment, Chispa was in contact with either me, or with Anna. AND, she slept with me on Anna’s couch that first night, and the following night as well. Yep, I slept with my 8-week old puppy loose on the couch, curled up so she wouldn’t fall off. Well, except for those couple of times she fell off. Oops.

On the drive home, she was in the lap of whoever wasn’t driving. Sleeping soundly for the most part. Getting her first lessons on how to be a great traveler, while sleeping.

Speaking of learning to be a great traveler…I knew that one of the great things about traveling GET Chispa was that she would be thrown in to travel right off the bat. Not in a forced way, just…she’d need to come along for the ride, and I’d need to be there for her. During that first day, when she was taken from the litter, she not only traveled by car for hours and hours, she also got to eat in a restaurant with Anna and me for lunch. She got to walk on grass, and gravel, and cobblestone streets. She got to go in to an underground parking lot. She got to be carried up stairs. She got to run and play on hard floors, and carpets, and she got to drink out of a variety of water dishes (food was all coming from the hand). Oh, and a BIG travel essential…yes, Chispa, I’m sorry, but you will need to poop and pee on leash, and sometimes in a tiny patch of dirt beside a busy street. No pressure, just…these are our options at the moment.

Between the time I had Chispa in hand, and the time she made it back home with me, she’d been in cars, on trains, buses, and planes. She’d been in my arms, in a Sherpa bag, and in a small crate. She’d played with her leash and with chew toys on the floor of the busy Amsterdam Airport, much to the delight of onlookers. She’d been petted and picked up by several different people, men and women alike. Good therapy for everybody. And, she slept most of the nearly 10 hour flight home. It was a lot of new input.

One day after being home at the farm, Chispa was loaded up again, along with all the other dogs, to head to the PNW USDAA Regional. She got to play in a strange hotel room, meet friendly dogs, play with puppies her own age and size, and again, was handed off to at least a dozen different people. Oh, and poop and pee on leash.

Now we are FINALLY home for a while, and my list of things to work on is growing. BUT, there’s time, time for all of it, and there’s no rush. I keep telling myself that. Yeah, I’m a fairly goal oriented type-A person. But, first things first!

Over the next few days, I’ll publish my current to-do list of behaviors I’m working on, along with a bit of video and some downloadable handouts. I hope you’ll join me as I continue to keep track of where Chispa and I are going together – I’ll also be writing some more about the philosophy I’m going to be working hard to operate under, not just for the good of our relationship and our training, but for my own personal self-improvement and such.

The past year has been a real eye-opener for me in so many ways, some of them dog training related, some of them not. But, overall, I find I’m spending more and more time in somewhat unfamiliar territory with respect to being REALLY open to things, REALLY brave with respect to stepping into the ring (really and metaphorically speaking), and it’s a nice space to be.