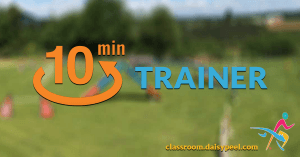 If you’re one of those people who, while at work all day, dreams about what you will do with your dogs when you get home, only to find that the time you had slips away from you between chores, children, spouses, and the other little necessities of life, then you’re not alone! In this series of articles, following the Bob Bailey motto of “Think, Plan, Do”, I’ll outline plans for skills that you can train in ten minutes or less, so that you can find the time you didn’t think you had to train your dogs!

In this episode of the 10-Minute Trainer, I’d like to share with you a few of the short exercises that I use with my dogs to make sure that we’re both on the same page with our understanding of location cues.

My location on the takeoff side of a turning obstacle, (a jump, straight tunnel, or chute) and my intent not to cross the plane of  that obstacle should indicate to my dog that the next obstacle, if there is one, is likely to be behind him, and I expect my dog to take that turning obstacle with the intent to turn and come back toward me. Figure 1 shows a couple of examples.

Often, our dogs’ understanding of location cues goes awry without our even noticing it.  As I like to say, we make agreements with our dogs on course that we’re not aware that we’ve made with them, until eventually, things progress to a point where a real problem has developed that needs to be corrected. Location cues are often such a problem.

One example of where location cues get confusing between the dog and handler, is when a handler begins to cue a pinwheel and a 180-degree configuration of jumps similarly. If a handler wants a dog to execute a pinwheel of jumps, forward cues are typically given for the first jump of the pinwheel, and turning cues are given for the second jump of the pinwheel. Compare that to how the first jump of a 180-degree configuration is typically cued; turning cues for the first jump are typically given, so that the dog does not consider a jump that may be present.  If a handler begins to cue a pinwheel as shown in Figure 1b, then the dog will eventually learn that despite the handler’s takeoff side location relative to obstacle A, which cues obstacle C and not obstacle B, the handler wants obstacle B. And, the dog will also learn that the handler’s takeoff side location relative to a jump does not cue a turn, at least not consistently.

The handler, through this process of slowly beginning to make the cues for a pinwheel look the same as the cues given for a 180, will lose the ability to cue a 180, because they are using 180 cues for pinwheels!

Another place where location cues get diminished is on the approach to tunnels. If a handler starts decelerating on the obstacle prior to a tunnel, never intending to cross the plane of that obstacle, and yet expects the dog to continue on and take a tunnel, very soon the handler will lose the ability to cue a turn at an obstacle prior to a tunnel with deceleration. See Figure 2.

Getting Back On Track

Reinforcing in my dog’s mind, and in my own, that my takeoff side location relative to an obstacle implies that obstacle and no obstacle beyond it – as long as I’m not showing motion with intent to pass the plane of that obstacle – is a simple task.

You’ll need for this exercise, a jump (wings preferred), a short tunnel, some cookies or a toy, and around 10 minutes. See Figure 3 for the set up.  In your set up, the jump should be around five feet from the mouth of the tunnel. If you find that you reach the end of this 10-minute session and your dog is still having trouble, then, in the next session, double the distance, and move the jump closer as your dog becomes more successful.

Release your dog and cue your dog to take the obstacle with a verbal jump cue only. If your dog takes the jump and turns back to you after the jump, then praise and reward your dog, and move on to the next step!

In all likelihood, your dog will take the jump and the tunnel. In this case, do not praise or reward your dog. Instead, reset your dog, and yourself, and try again. Typically, I’ll repeat this 5-6 times to give the dog an opportunity to change his behavior, before changing mine.

If my dog was successful in the previous step, or if my dog has made the same error several times, then I will change my location to show my dog where I would be if I wanted the tunnel. See Figure 4. I will repeat this a few times, perhaps 3-4, so that my dog gets to take both the jump and the tunnel, and then I’ll go back to a takeoff side location and repeat a few times, so that my dog is rewarded for taking only the jump.

If My Dog Has Trouble

If I’ve tried the first step (Figure 3) several times and my dog does not seem to be understanding that my takeoff side location implies only the jump, and if I’ve tried letting my dog take the jump with a location as shown in Figure 4, and then going back to Figure 3, then there are a few things that I can do to make the tunnel less enticing to my dog.

Once you’ve gotten this exercise down, so that your dog understands that your takeoff side location implies a turn, and your landing side location implies going forward, you can begin introducing motion, so that your dog also understands that motion from the takeoff to the landing side of the jump implies going forward, and deceleration on the approach to the takeoff side of the jump, with no intent to cross the plane of the jump, implies a turn, and not the next obstacle that may lay beyond the jump.

Beyond this, it is your job as a handler to maintain this understanding, through consistent application of your location and motion cues on a course, and perhaps by revisiting this exercise periodically. It’s one that I revisit every few months, just to be sure that I have been consistent with my own location cues! Be patient, have fun, and you can get a lot of mileage out of this simple exercise. Happy Training!

wpDiscuz
0
0
Join the discussion and leave a comment!x
()
x
| Reply
You are going to send email to
Move Comment