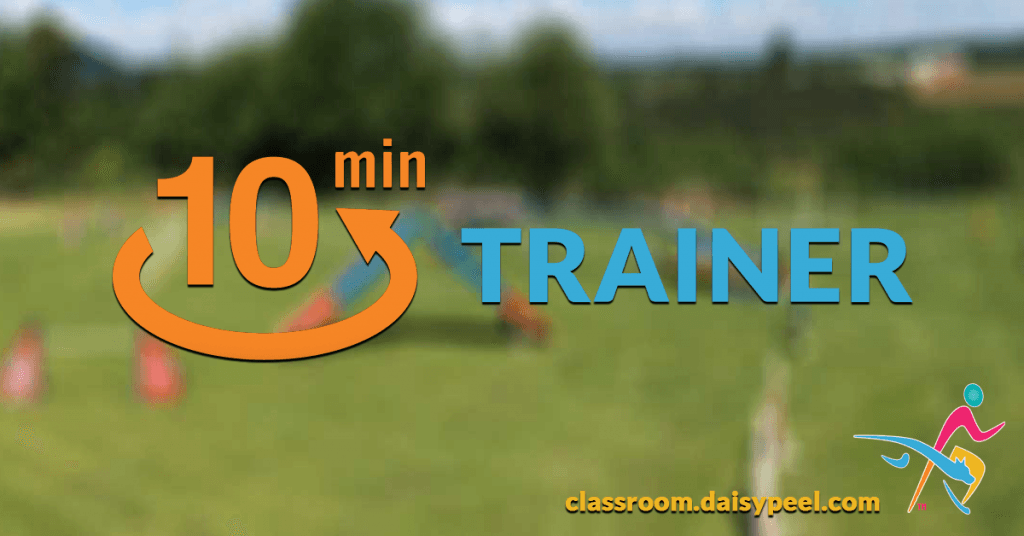 In this episode of the 10-Minute Trainer, we’re going to spend our ten minutes working on an obstacle that is often overlooked….the table. Personally, I find that spending my time working on fast sits and downs on the table is pretty boring, and of course, since I don’t find it exciting, my dogs don’t either! I do, however, want my dogs to perform any behavior that they can do on the ground on the table, and with equal zest and speed.  So, I want to do a lot of fun things that revolve around the table. And, it turns out that the table can also be a great piece of conditioning equipment.

Just spending time doing a variety of activities with the table, even if it is in my living room, will help bring the table up in value in my dogs’ minds. Ask yourself – have you given your dog the same amount of cookies or toy play as reinforcement for activities revolving around the table as you have for the weave poles or the contacts?

For most of us, the answer is probably no. There’s a reason many of our dogs gravitate toward contacts and not the table – think of the ratio of cookies spent on the contacts vs. the table! The following exercises are just some suggestions of how you might spend 10-minutes with your dog building value for the agility pause table without ever even working on a sit or a down position on the table itself. Enjoy!

Jumping up on the table from a location close to the table itself is one thing. Jumping back DOWN is yet another. Of course I wouldn’t do this on any sort of slippery surface, and I will take care to make sure that my dog is safe. But, once my dog is up on the table, I can also place cookies close to the base of the table, on the ground, and release my dog off the table to get those cookies. This can be a useful activity for those with larger or more enthusiastic dogs that tend to push off the table horizontally when released, with such force that they knock the table back, causing it to slip out from under them.

In AKC, the dog must come off the table with all four feet in order to be faulted. On more than one occasion, I’ve been glad that I’ve played this game with my dogs on the table! Occasionally, my dogs have miscalculated their speed on approach to the table (or I’ve miscued how much speed they should have), and have hit the table only to slip off again. But, thanks in part to this game, they know how to avoid coming off entirely, and can actually back themselves up on to the table. Be advised, this is a great conditioning exercise, but it also requires a great deal of strength – so start with a low table to start, and go from there. It also requires that your dog have some experience with targeting objects with his rear legs, or that he know how to back up.

With this exercise, I purposefully don’t lure my dog forward in to a two on/two off position on the table, because I don’t really want him trying to drive forward to such a position. And of course, I’ll make sure that I’m not doing too much of this activity. As with all other exercises, moderation is the key. What I really want is for my dog to get as few cookies as possible with this exercise, until his whole body is on the table, and then, he will get a LOT of cookies.

At some point or another, probably sooner rather than later, your dog is going to have to be up on an agility table, at a trial, OUTSIDE the ring, in order to be measured. So, in anticipation of this, include some measuring games in your table training repertoire. For this game, use a hula hoop cut in half, or a homemade measuring wicket made out of three short pieces of PVC and a couple of 90-degree PVC elbows. With your dog on the table, do the following:

In each of the above cases, click for attention or movement toward the wicket, and then deliver your cookie such that the dog has to continue to move toward or duck his head under/through the wicket to get his cookie.

With your wicket, you can also reward your dog for:

In addition to the activities above, there are many tricks that I teach my dog on the ground that I might also do on the table. For some of these tricks, marked with an asterisk (*), performing them on the table adds an added element of strength and coordination, depending on the stability of your table. But for all of these tricks, teach your dog how to do them on the ground first!

You can make this list even longer with the tricks that you’ve taught your own dog. Some tricks, of course, are not appropriate to do on the table, such as backing up, or rolling over, for obvious reasons. And you can see that on my list, a simple “sit” and “down” aren’t really even included.

Of course, I do teach my dogs to maintain a down position on the table until I say my release word. And, I do a lot of exciting gyrations when they’re in a down stay on the table to see if, in a playful way, I can entice them to come off the table. When they do make the mistake of coming off of the table, however, because I have done all of the above activities on the table with them, they are typically quick to get back on the table. And, when they mistakenly come off, all of my gyrations stop suddenly, and I become far less interesting. Then, when they do hop back on the table, I’m quick to reinforce in their minds that the table is a really fun place to be! So much of the rest of an agility course can be so much fun for the dogs that some time spent specifically making the table a fun place to be is time well spent – and it takes very little time and space to do it.

Sit or down on a table should just be one of many things your dogs might do to earn a cookie while they’re up there. And, like any other behavior you might ask your dog to do as a trick on the table, sit and down should be viewed as a trick – cued with a smile on your face and praise at the ready!

Funny (sort of, sineCe no one was hurt) tale to show me how important it is to look at things from the dog’s point of view. My pause table is a pvc base with a wooden top. I had taken the top off for repair..but left the base on the field. Dogs and I were training in the neighborhood. Older dog ran to it and put he front paws on it. Freak thing I thought. But a short time later my younger dog jumped entirely on top of the base (pvc in an x shape).needless to say this was not… Read more »

@mayamck45 Yes, and some colors are really hard to see. I was at a show not too long ago where the judge had a table inside a C shaped tunnel on the course. The base of the table top (the strip around the bottom of the top) was the same color as the table, and the legs too. It made the table very difficult to see and a bit dangerous IMO. But, all was well, thankfully!

wpDiscuz
2
0
Join the discussion and leave a comment!x
()
x
| Reply
You are going to send email to
Move Comment