The story of how I stalked someone

Posts by Daisy > The story of how I stalked someone

This is the story of how I stalked someone. Yes, I know, it sounds creepy – but I’m not crazy! Let me explain.

The other day, I had a conversation with a friend. I mentioned that it surprised me that so many people invested so much time and effort diving headlong in to dog agility without knowing who their heroes were. So many are “just looking to do something with their dog”. A dog that may have already found activities of its own to engage in – like chewing the furniture, or doing some version of dog agility IN the house.

In what other sports, I mused, do we in to dive so deeply, without knowing who the ‘heroes’ of the sport are?

How long are people immersed in a sport before knowing what the best of the best looks like, who the creme de la creme are, what the aspirational standards are?

How many get in to dog agility because they saw what was possible, and aspired to those heights, vs. “please just help my dog not drive me crazy”?

Now, there’s no right or wrong here, of course.

Maybe you got in to dog agility because you saw the amazing dance between handler and dog that is an incredible few moments of teamwork and aspired. Maybe you have a dog whose household acrobatics are driving you nuts and heck, look how agile the dog is jumping from couch to sofa to hearth and beyond. Regardless of the reason, everybody wins in the end, right? In my own story, which I’ve mentioned before, I didn’t even HAVE a dog when I saw this thing called dog agility. And when I did see dog agility it wasn’t being performed by the top teams at the time. But, I immediately aspired. I didn’t need to know what the ultimate ‘best’ looked like in order to aspire to interface in such a cool way with a dog. A dog I didn’t even have, but had plans for. Oh, I had plans.

Soon after I got a dog, and started up training in preparation for agility, I started stalking someone.

Oh man, oh man, oh man. Now, I should back up a bit, because by December of 2001, I was already starting to stalk someone.

In September of 2001, I went to my first National Event, with my dog Fly. Yep, September 2001. It was USDAA Nationals, and it was in Del Mar, California. I wasn’t even sure I’d be able to go, because it wasn’t long after September 11, 2001. Flights were all grounded, and it was just a weird time. But, in the end, I did get to go, and it was incredible. It was there that I met my first agility hero, kinda sorta – I didn’t even get close enough to have this happen – a friend of mine got this signed for me:

Yes, 19 years later, that poster is laminated, and hanging on the wall in my arena.

So, clearly, even then, I had started to stalk my heroes, because I remember wanting them to sign this poster, and talking about them, but being too nervous to approach them and ask for an autograph. A friend of mine who was also in attendance snagged the above autographs, and I have cherished this poster ever since. What words of wisdom from two of the greats in the sport.

Just a short time after that, in October, Team USA went to Portugal for the Agility World Championships. I’m sure I was aware that it was happening, but it wasn’t really on my radar. Not like today, when people at big events are posting video live at the events from their phones, that’s for sure! But, when that Clean Run magazine came out in December, I knew that we had won GOLD in team large. I knew we’d done something amazing. And I knew THAT was what I was going to shoot for. Team USA, World Agility Championships, just like my heroes had done.

A lot has changed in the sport since 2001 – check out the video of all the Team USA runs from that year, below.

I learned a LOT by staring intently at those who were at the top of the sport at the time. There was no FaceBook, and there was no YouTube. But, I followed my heroes as closely as I could, and reached out to them for instruction. Nowadays, I’ve become friends with those who I started out by stalking. I wanted to learn everything I could learn by watching them, emulating them, all of it. I wanted to be up on that podium, listening to the National Anthem play.

Fast forward to a couple of years ago, when I started The Agility Challenge, and got really interested in several books that had hit the shelves on the topic of the myths behind talent and greatness, and how deliberate and purposeful practice were the hallmarks of those who were ‘at the top’ in their respective fields. One of my all time favorite books is a book called The Talent Code, by Daniel Coyle.

One of the tips in that book was that those at the top stare intently at who they want to become. In the companion book he wrote, The Little Book Of Talent, he states:

If you were to visit a dozen talent hotbeds tomorrow, you would be struck by how much time the learners spend observing top performers. When I say “observing,” I’m not talking about passively watching. I’m talking about staring – the kind of raw, unblinking, intensely absorbed gazes you see in hungry cats or newborn babies.

That was me, all those years. Starstruck, but also, hungry!

Stalking my agility heroes fueled my motivation to work toward greatness in the sport! It’s something I encourage my students to do now, as well. I don’t tell them to stalk their heroes, of course. I use the language in Coyle’s books, and encourage them to stare intently at their ‘heroes’ – those at the top, those who are performing the way they would like to perform. And now, we have a lot more access to those top performers in terms of being able to watch them!

So, why do I share this story with you?

Well, because staring intently at who you want to become is a great way to accelerate your development in the sport. At some point, of course, you’ll have to be comfortable with forging your own path, and being your own trailblazer. BUT, watching the success of others, and figuring out how they did it, how THEY solved the problems and challenges you’re looking to solve, can help you in a couple big ways:

So, don’t be shy – go forth, and stalk! Well, maybe don’t stalk. Just…stare intently at what you want to become! And, don’t hesitate to let your heroes KNOW that they’re your heroes, or at least, that you admire them and that they are an example to you that motivates and inspires you. You never, now, you may just end up having your hero become your coach, instructor, mentor, and friend. 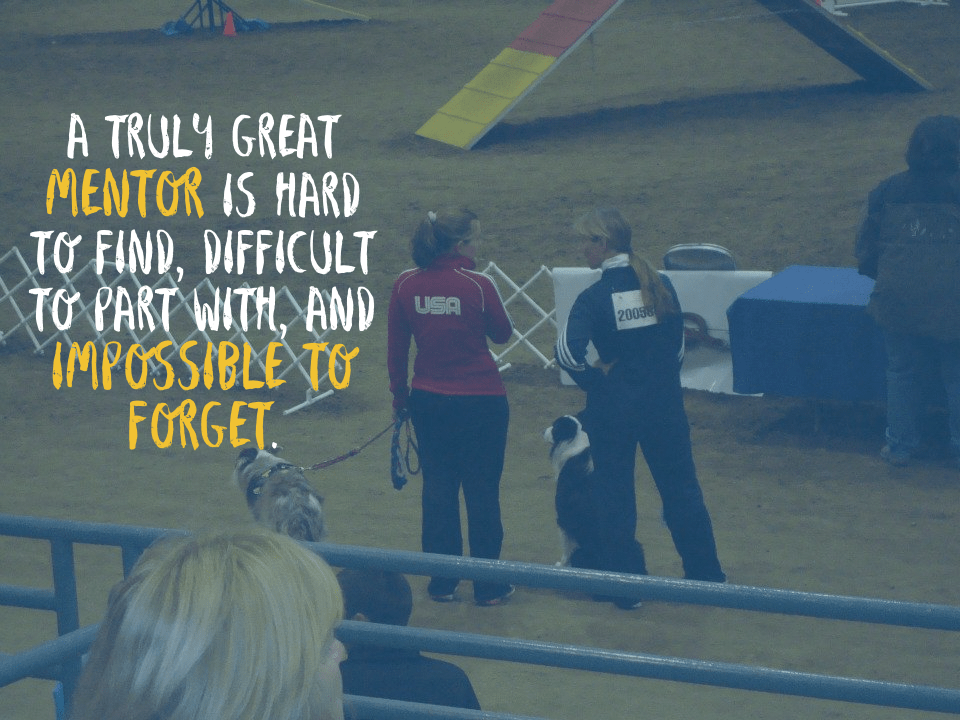 No real heros in the sport near me. Attended many agility seminars when they were offered, and having been training dogs for over 25 years prior to agility felt some were not quite good at the training part. So glad you have the Agility Challenge to train those important foundation skills; even if I can’t handle my fast dogs with front crosses or blinds, because I am usually behind them