Afraid to be beautiful

Posts by Daisy > Afraid to be beautiful

Juno is my only girl dog. Those of you who know me know that although I love working with students that have female dogs just as much as those with male dogs, there’s just something about me that just likes boy dogs more. It’s the boy puppies in a litter I ooh and aah over, and I just love their dopey happy attitude toward life. Girls in general seem too serious for me, and I’m already serious enough! Boys seem to temper my seriousness…

And yet, I have Juno, and I can honestly say that she is my favorite out of all of my current dogs (the rest of whom are male). She and Solar are both constant companions in the house, but it is Juno who will jump up on the chair behind my standing desk and paw at me to turn away from my computer to pet her. Juno brings me my shoes, bones, toys, anything she can find. She brings me sheep and is a thing of beauty when she is herding – she forgets she is afraid to be beautiful when she is herding sheep and is like watching a field of ripe grain swaying in the breeze on a summer day…or any other number of beautiful things you can come up with, that is Juno when she is herding. I’m getting sheep when we get back from Belgium, to eat the grass, but in large part to give me more opportunities to watch Juno be her beautiful self. 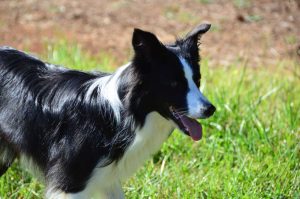 Juno is an amazing agility dog. She can bend and twist over the jumps like you’ve never seen before. She is faster than Solar, she can turn tighter than Solar, and her contacts are better than Solar’s. She can make turns off of the end of the dogwalk, at full speed, that are unbelievable. She barks, she bites, and has a grand time doing agility.

Most of you who have seen Juno run at a trial, however, have not seen that Juno. The Juno that resides between the rings at a trial is barking, jumping up and down, and keen to watch the dogs in the ring. But that Juno gets left at the gate, and the Juno that usually enters the ring has her ears down, head down, and tail down. The Juno that most of you see is plodding around the ring at less than half the speed she goes when nobody is watching.

So, a couple of weeks ago, at an AKC Trial, when Juno and I had this run together, I was absolutely thrilled. My mouth was filled with dirt from my lower jaw scraping on the ground the whole run. This is still not the Juno I get all to myself at home, but she was HAPPY, and had her game on:

Yes, she dropped the triple at the end – but frankly, if that is the cost of Juno letting others see what I get to regularly see when we’re on our own, I’ll pay it, and more.

This particular trial was a 4-day trial, and I spent much of my time before entering the ring teaching Juno to nose-target the ring gates. By the end of the weekend, she was pulling happily TOWARD the ring gates, rather than cringing when we approached as though I regularly beat her with them. To an unsuspecting onlooker, she probably looked like she was straining to get IN to the ring, although I knew she was just straining to get TO the ring so she could touch it with her nose for cheese. But, I’m OK with that, it’s a good start.

On Sunday, Juno and I finished up our 20th QQ to get her MACH. At the end of the run, rather than a “victory lap”, we just did a “victory jump”, and you can see that although Juno was holding back for the run, she let her guard down a bit for the victory jump 🙂 I thought that would be more productive than asking her to run around the ring again 🙂 I’ve gotten MACH titles on four dogs now, and I can honestly say that aside from Fly’s first MACH (and mine too!), this one has represented the most in terms of “becoming” on my part, and so it’s a very special one.

This past weekend, a friend from Australia was in town staying with me while I taught a seminar at the Clear Mind Agility Hall. She ran Juno for the seminar, and although there were other people watching, Juno really warmed up and ran for Simone. Beautiful, sweet Juno…Juno, who is afraid to be beautiful, let a whole group of people in on her secret – that she is amazing. It was hard to give good handling feedback to Simone, I was so happy watching Juno be happy.

I don’t know if Juno will ever let her guard down to let the world see how beautiful she can be, but I’m going to keep at it, in the hopes that one day, we’ll turn that corner together, and have run after run after run that makes my jaw drop to see how happy she is. With Solar and Jester, it is all too easy to take for granted a love not just for agility, but to step into the limelight and shine in front of others. Juno has that same love for agility, but it is rare for her to lift up her head with pride and have a run like the one at the top of this post. When she does, though…those runs are more special than any National Championship Final run could be to me.

All of us have had the experience of being afraid to be beautiful, and Juno’s ongoing lesson to me so far has certainly been one of learning how to be more nurturing, and to not take for granted how easy it is for some (dogs and people alike) to go into the ring and shine; for others, like Juno, it is not so easy.

My husband and I have often joked about what we’d say to each dog if we had just a few minutes where we could speak plainly to our dogs and have them understand us. If I had those few minutes with Juno, I’d spend them telling her how amazing she is, encouraging her to be brave and beautiful and proud. 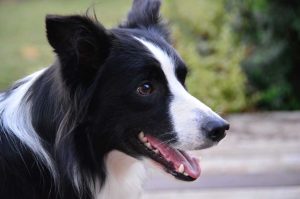