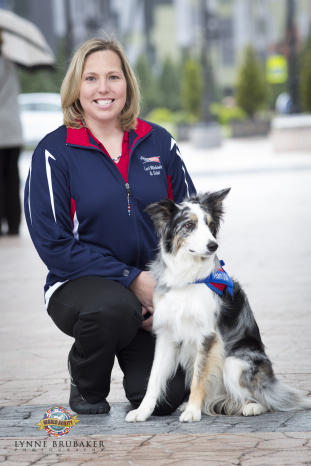 An avid dog training enthusiast since childhood, Lori has been dedicated to the sport of agility over the last 20 years by competing at national and international events, as well as instructing classes and seminars throughout the US.

Along with her Shelties and border collies, Lori has appeared in the AKC National Agility Championship finals 6 times and USDAA Grand Prix, Performance Speed Jumping, Steeplechase and DAM Team finals over 20 times, as well as earning multiple regional championship titles.  Lori and Skye were members of the AKC/USA Agility World Team in 2006 and 2007, helping their team finish 4th in 2007.

Lori and her 6-year-old BC, Solei, have represented the US on the World Agility Open team the last four years.  In 2012, they won the Gold Medal in Biathlon Games and the Bronze in the Agility Biathlon.  At the 2013 WAO, Lori and Solei earned the Gold Medal in the Individual Agility Pentathlon, the Silver in the Agility Biathlon and contributed to USA winning team Gold.  Team Gold was repeated in 2014 along with Bronze in Games.  They helped USA earn the Silver in Team in 2015.  They were also members of the 2014 IFCS Team and earned medals in Agility and Gamblers.

They recently returned home from the FCI Agility World Championships in Italy where she and Solei had clean runs to help their team earn 3rd in the Agility class.  They finished 10th, individually, in the world!

Beyond being an accomplished competitor, Lori has gained respect in the agility community for her devotion as both instructor and coach to local and long-distance students.  Her greatest satisfaction comes from helping others meet and exceed their personal goals with their own dogs.

We use cookies to ensure that we give you the best experience on our website. If you continue to use this site we will assume that you are happy with it.Ok, got it!