While there are 2-3 items I have on my list of things to do this week with respect to posting actual TRAINING to the blog, today was just a fun day. After a long morning of talking to various mortgage lenders about refinancing the house, I found I was kind of mentally and emotionally wiped out. So, an afternoon walk in the woods seemed like something mindless yet productive. Off we went.

I’m so fortunate to live just a few minutes away from some glorious trails, including ponds that the dogs can swim in. They’re fishing ponds, which means that the hotter the weather, the less likely the fish are biting, and the more likely the dogs can swim without interrupting somebody else seeking solitude as well. I don’t get a chance to walk every day, although with a little effort I could, and should be out there every day that I’m home. Even so, a walk in the woods is always so nice.

And…ever goal oriented, I figured it would be an opportunity for Chispa to work on thinking about swimming, maybe. Of course some of her littermates have already been in the water, so I figured, must keep up with the Joneses, right?

Chispa is brave about many things, but about water, she is not so sure. In the past, I’ve taken the heave-ho approach, which is to say I just toss a puppy in, provided I think they’re brave enough to handle it and they seem to WANT to go in. That first step is the hardest, right? But, you know, I didn’t really feel like it this time. No need to be overbearing, just let her go in at her own pace. Baby steps. Of course, I had incentive – treats that float!

It’s a small tragedy that I filmed vertically rather than horizontally with my phone. The puppy cuteness will make up for it, right?

Chispa got in after some convincing, but she was not thrilled about being wet. It was pretty cute, she kept squatting like she thought she had to pee, because water was dribbling off of her lady bits. She only swam for a few seconds longer than the video above captured. Like just about everything she does, it was not without at least some forethought. She’s lively, and vivacious, just like her name (Chispa means “sparky, lively, vivacious” in Spanish), but she’s not careless, really, and seems to have a lot of good German logic about her as well. It took a little bit of build up before she decided to wade in and swim after the cookies that were floating just out of reach.

When she was finished with her tiny swim, she had to back up and sit down for a moment to think about what had just happened. Then she tore around and rolled a bit, squat, roll, squat, roll. It was pretty funny.

Again, like a doofus, I filmed vertical. But again, who cares, because…puppy!

She was a little square, and now, she’s a little rectangle! 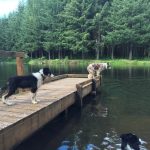 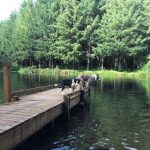 Checking out the dock 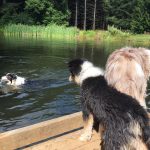 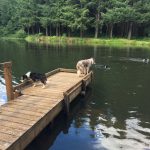 Sittin’ on the dock

It’s funny how sometimes I don’t think she’s grown at all, and then, there are moments, like today, where I realize, she’s really getting BIGGER. And right now, her rear end doesn’t quite match the front end. But, oh my goodness, I am smitten with Chispa. She is so right up my alley, and I am enjoying her so much. She probably won’t learn oodles of tricks; it’s just not something I have time for at this point in my life. But she IS learning, bit by bit, and it’s at a pretty enjoyable pace for the both of us. And she’s just so much darned FUN. Her name fits her perfectly.

Nothing but puppy gushing for today; tomorrow it’ll be back to “real” training. But as far as developing the dance, the dance the two of us will do as a team in and out of the ring, even slowtime summer days like today are “real” training. No need to worry about accomplishing this or that trick or behavior each day. It’s not a job, it’s not a “must do”, it’s just fun, enjoyment, and relaxation. Chispa has far more freedom than any of my other puppies have ever had, and guess what? She’s doing just fine. Instead of me constantly trying to solicit HER attention, it’s the other way around – she solicits MY attention. And when I do need a snuggle and she’s too busy to settle in to it (which is always), I hold her just long enough for her to give me a kiss and a lick, and then I put her down and she’s off again. And even THIS is “real” training, because over the past few days, guess who is settling in to do a lot more licking and kissing and snuggling? Yep.

Now hey there, Chispa, quit chewing on my laptop! Reverie over…

I like how you let Chispa make the choice to go in the water. Bazinga swims at Aqua Paws occasionally though he wears a still wears a vest. We play water frisbee for 25min working on endurance (I toss it 35′ the length of the pool). Next time, when he’s fresh, we’ll try it without the vest.

Wow, that’s a long time swimming! I can’t let any of my adult dogs but Juno and Frodo swim that long, because all the others drink while they are swimming :\ Then if they don’t have dog door access it’s an accident waiting to happen…where is Aqua Paws located? I love the ponds out here; my dogs will swim in them year round 🙂

Thanks for sharing Daisy….. And you write magically….I was there with you!