Puppy Posture and Recalls to Heel

Developing the Dance > Puppy Posture and Recalls to Heel

Today is day ONE of the third annual Clear Mind Agility Camp, and I thought I’d take a few moments to update the puppy blog. No real training is being done with Chispa this week, other than “learn to spend a lot of time in your crate”. This is a good lesson, and one she needs to get comfortable with, and as I can’t be around to hear her barking (if it’s even happening), I’ve avoided needing to feel guilty when I hear her. I’m also dying to get her out of her kennel and play with her during the lunch break!

Last week, while teaching in Alaska, I taught a session on foundation/fundamentals. These sessions can often go in a variety of different directions depending on the dogs that are present, and this one was no different. One of the students had a puppy just a few weeks older than Chispa, and another student had a dog that was about a year and half; quite a spread. “Recalls to Heel” was on the list of things to do, and it’s a FUNDAMENTAL behavior in my mind, but also, a super BORING behavior to train. When I say “recall to heel”, I mean a recall as taught in Mastering Jumping Skills – it’s a skill that does reward the dog for coming to the handler, but it’s the HOW that is important. And, frankly, the HOW is applicable to herding, obedience, and life in general. The recall in heel is meant to teach the dog to stop using her rear end. No crashing in to anything with the front feet while the rear end swings about. Being able to stop nicely with the front and the rear makes for a nice, sudden stop, like a quarter horse.

What I DON’T want (watch til the end)

So, anyway, I’ve got this group of inexperienced dogs, the youngest being 14 weeks. Obviously, the 14 week old puppy isn’t going to be able to do all the exercises. BUT, recalls to heel? YES, absolutely, and here are some of the reasons why:

Your puppy can probably already do it 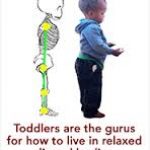 We all start out with great posture 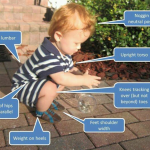 We all start out with great posture

When asked what I do to CORRECT some of the problems dogs have with the recall to heel, I was a little at a loss for words. I know all the things you can do, and I teach all of those things, but since Chispa was right there, in her ex pen, and puppies are high on my mind, I realized that the best answer was to never let those issues develop. This led in to the question of “do I reward if the dog does it wrong?” And again, ideally, I don’t want to be in a position to HAVE to withhold reinforcement with this one – I don’t want to NOT reward my dog for coming to me, after all!

Puppies, like toddlers, already HAVE good “use” of their bodies. Correcting people’s posture problems is a HUGE industry – so many of us engage in ways of moving about in our world, including sitting, that are NOTHING like the way we sat, stood, walked, or ran when we were toddlers. Of course, we are much more coordinated, but our posture is typically much worse, and that poor posture, sitting or standing, typically leads to all sorts of problems.

Puppies, like toddlers, already seem to, for the most part, possess the ability to move nicely through their worlds. Sure, they’re floppy and not coordinated. BUT, they can stop with their rears square behind their fronts. They can come in for a recall and they already DO it. It’s we as handlers/owners who start to promote poorer “use” of their bodies, either through what we allow to happen in the house, at the park, OR, in formal training.

The goal of ANY training is to CAPTURE the behavior, REWARD it, and GROW it. Puppies already HAVE this behavior – we just have to capture, reward, and grow it!

This training is not the most exciting stuff

Another reason to start working on recalls NOW, aside from the notion that right now there’s lots of GREAT behavior to capture, reward, and grow, is that it’s not super exciting, IF I focus on it as an agility specific behavior. But, I can honestly say, I NEVER have recalls to heel on my to-do list. Recalls aren’t something I decide to start working on. They’re not something that I put in my training book or calendar. It’s just the way I want my dogs to come in to me – ALWAYS. From the very beginning. You’ll never hear me say “oh I worked on recalls today”. The only time I’ve formally worked on recalls as an exercise that I can remember (assuming I did this early on when I was just learning) was when I was filming them with Chipper for the Mastering Jumping Skills Foundation Flatwork class. I just don’t think it’s exciting enough to be working on during a formal training session. If I just make it part of the way we interact, ALWAYS, I don’t need to WORRY about making it exciting – it’s just how we dance together.

This isn’t an agility skill, it’s a LIFE SKILL

As I mentioned before, I want my dogs to ALWAYS be coming in nicely to me, stopping with their rear ends underneath them, not just in agility!! Nothing makes me cringe more than seeing dogs running around with no regard to how they’re going to STOP. I start seeing dollar signs in front of my eyes, and vet bills. I don’t want them running in to me, or each other, or the walls, or trees, or anything. I don’t want them slipping and sliding through life. I’m pretty careful to not engage in behaviors such as coming in to me for a toy, grabbing the toy, and swinging off of it. Obviously my dogs run around, and obviously I play games with them that include toys. I just try to be constantly aware of what good “use” is, and encourage and promote it.