Some time ago, one of my students spoke to me about her plan to teach her highly athletic, high prey drive, driven standard poodle. She wrote a blog post about it around the same time, and you can read it HERE. I loved the idea behind it. Of course, the idea of keeping training sessions short is well known to me, and on the whole, I tend to keep my sessions pretty short, a few minutes or so. But there are also plenty of times when I get obsessed on FINISHING a behavior, or ACCOMPLISHING something by the end of a session, and then the session drags on, or I start to feel pressure to MOVE on this or that behavior.

Diana’s idea was that while she had no desire to spend oodles of time teaching her dog to walk on a loose leash, she could commit to just TEN TREATS a day (not per session, per DAY), for a whole year, and see where it got her. It’s June now, and she started this program of ten treats a day spent on loose leash walking in January. Far short of a year, and her dog is already walking on a loose leash most of the time, ignoring the squirrels he used to lunge after while on leash, AND walking on a loose leash even at agility trials, until it’s time to go to the line. That’s PROGRESS! Even better, progress without a huge commitment 🙂

So, the whole ten treats a day thing has stuck with me for some reason. I love the idea of spending X treats a day on a behavior and then done. Even with the crate – 10 treats a day for waiting to come out of the crate, and then the rest of the time, eh. Pick any behavior, really. Some behaviors become a constant battle, particularly loose leash walking. Ten treats a day.

Chispa is getting more than ten treats a day, for sure. But she’s also learning more than one behavior. I’m keeping the ten treats a day idea in mind, though, and have adapted it it to “ten treats at a time.” Meaning, I’m going to try hard to not spend more than ten treats on ANY one thing at a time. There is so much for Chispa and I to learn at this point, that it doesn’t seem wise to spend more than a minimal amount of time or treats on any one behavior before moving to the next. In this fashion, I hope to keep some semblance of balance between ALL of the many things we might be working on at any one time. Ten treats, and move on. Maybe LESS than ten treats, but don’t go down the rabbit hole of twenty, thirty, forty treats on ONE behavior. Chispa won’t get bored, I won’t get bored, AND I won’t be as likely to get swept up in the “must accomplish this NOW” mindset. It’s a process.

No “formal” training today for the blog. Chispa and I worked on food bowl manners and offering to go in her crate at the same time this morning for breakfast; she offered to go in her crate when she saw I had a bowl of food, and so I figured I’d reward it with a few kibble. Then, I just started playing the food bowl game right there with her, just two or three times of me asking her to sit briefly before I put the bowl down to let her finish. Then some running around, tugging, playing, then a nap while I built fences around the garden. Then more running around and tugging and playing, and then she came outside with me to pick raspberries, and learned how to pick them off the lower vines all by herself 🙂 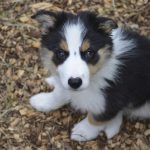 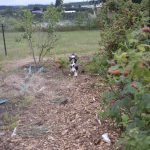 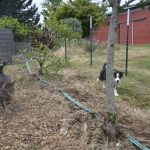 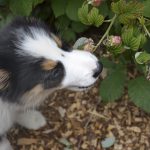 I can chew on this too 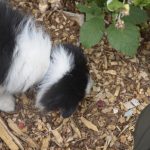 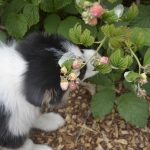 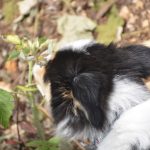 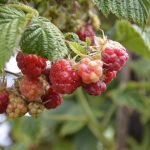 In past training, I have found myself caught in a little trap of if my puppy has done something correctly once, can he really do it right several times, meaning does he understand the exercise. In doing that, I have passed the point where I have his attention and also the puppy has ended on a different behavior, of which I was not training. So the training session ends with the wrong behavior in the puppy’s head. I have made a commitment to Hunter and myself that I will end a training session after using up 20 treats whether he… Read more »

That’s a great idea, and although I’m sure Chispa is getting way more than 10 actual treats (I give her a handful of kibble, quite often, for each reward, at least at this stage), I try to only ask for a behavior a max of 10 TIMES. 20 times is a LOT, in my mind; it’s pretty repetitive and really, I don’t want a puppy that can just do things repeatedly. I want a puppy that grows up in to a problem solver who can switch gears quickly and choose from a range of possible behaviors as responses to stimulus… Read more »