Last training before AWC with Chispa

Training for the last month has been very sporadic with Chispa. I knew that it would be – between my travels around the country and the globe in October, and then USDAA Cynosport, and then Thanksgiving, I knew it wouldn’t be until after Thanksgiving that any real training got underway again. OH, and, the TURF PROJECT. That took a lot more out of me than I thought it would, in terms of time and muscle and effort. It was oh so worth it, though… 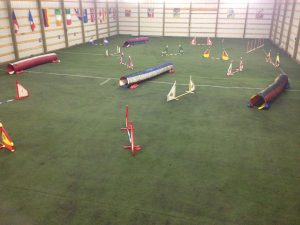 All of the dogs think the turf is pretty extra special – I don’t know if it is the turf itself, or if it is because **I** am excited to go out and train and practice on the surface, but all of the dogs are pretty amped up. Anna is here, as well, from Germany, and that certainly brings up the level of excitement out in the arena – I have a training partner!

With that additional excitement, as well as the long break in regular training, AND the change in surface underfoot, Chispa has lost her marbles. I’m so happy to see how excited she is to play, but I have had to take some HUGE steps back in how I approach working with her. Her running contact training, for example – while it was in the very early stages, there was SOME understanding of at least staying on the plank while heading toward the Treat & Train. When Anna and May are in the building? Nope. Recall? Nope.

And, since the surface is now turf and not just dirt, I am also keen to keep accidents from happening. So, dogs need to potty before going into the building. …And….Chispa couldn’t even bring herself to do THAT yesterday, when we finally got down to some training.

So, stepping pretty far back. I gave up on a second round of training yesterday afternoon before we headed out to Thanksgiving dinner; she had to potty before going into the barn, and as she couldn’t do anything other than bounce around and eat grass and try to make repeated breaks toward the building, she went back in her crate. The good news was that when we got home several hours later, and I suited up in my finest rain gear, and headed out to the potty area near the agility building, with Chispa on leash, I KNEW she would have to go. And, of course, she did.

Again this morning, she came out of her crate, went on leash, and we headed out toward the building, to potty FIRST, get rewarded, and THEN run into the building for a few minutes of distraction-free training. I anticipate that after I’m done with this post, and go out to do some more training with additional dogs in the mix, she will be similarly distracted. Come to think of it, maybe I’d better put her in her crate NOW in anticipation of trying to get her to do a pre-agility training pee….BRB

So, what *am* I working on with Chispa? I’m continuing to work on her running contacts – I haven’t gone any further than the last video, because Anna and I discovered that she’s basically incapable of doing anything on the plank when there is any chance of something happening in the arena (Anna moving around, May moving around). And, she can focus on me for a few moments at the far end of the arena, if Anna and May are running around, but after that she breaks off of me to go zooming over to check out Anna and May. She does come back, but obviously, not breaking off in the first place is critical.

So, for now, I’ll be continuing to work on her running contacts, and her tunnel/threadle behavior, when I get the chance to take her out alone to the Agility Hall. But, when there are other dogs or people in the mix, I’m going to keep things very simple until Chispa is more comfortable focusing on me when she’s really aroused and there is exciting motion going on. This is nothing surprising; just about every dog I’ve had goes through this, and who can blame them? I’m almost always alone in the barn, and while Chispa has had Frodo running around as a distraction, it’s not the same as a NEW dog or ALL my dogs, and milling around is also not as exciting to her as purposeful movement.

Here’s a snippet of what we did yesterday – basically, keep tugging when there are other dogs running around (food is not exciting enough right now but will be, I imagine, as she gets more used to this arousing environment), and do a couple of very simple tricks that she learned early on (remember high-fives?). I love how excited she is to play, and I don’t want to tread too firmly on that, so I’ll take it slow for now; I’ve got plenty going on anyway, working on some training with Frodo, finishing up the turf project, etc. But some things simply must happen – like pottying before training 🙂

Ok I know much time and other things have come to pass for this blog but this one is very helpful for me right now. My baby is almost 9 mo old and for the past month he has suddenly forgotten his recall, his impulse control, and focus during our training times. He managed to eat a shirt and my breakfast all in one day! I was starting to get really worried but so glad to hear that the very large step back we have needed to take is just part of the stage of life and this too shall… Read more »

Awesome – what a great demo of working thru arousal, to have the puppy play with you over the very exciting (and gorgeous) BC pack 🙂 Thank you for sharing this.

Her brain is still on overload with all the activity. But, I’m getting up in the morning, taking her out to the pre-agility hall potty spot on leash, pottying, then going in for a little early morning training. Today she managed to potty before going in the agility arena for a second time, when there were other dogs around AND a dog she could hear in the arena 🙂 Progress!

wpDiscuz
4
0
Join the discussion and leave a comment!x
()
x
| Reply
You are going to send email to
Move Comment