Chispa is a puppynado. We are slowly but surely entering the less and less sleeping throughout the day phase. She’s pretty good in her crate, placed near the desk in my office, but she’s wanting more and more activity when she’s out. She’s still at her MOST active just before she crashes for a nap; running laps around the living room, upping the bite-everything-NOW game to a near frantic level, wild-eyed. Yesterday, one of the BEST moments was when she was out running around the house. I’d lost track of her momentarily, only to see her OUTSIDE, in the potty area, pooping. And….drum roll…the door was CLOSED, so she had to use the DOG DOOR to get there! Woo hoo! That was quick. It helps that the water bowl for all the dogs is outside on the deck, and she gets pretty thirsty with all her running around and eating of kibble (otherwise known as training treats). So she heads out to get a drink of water, talk to Tucker a bit, potty or poop, and then heads back inside.

This is NO predictor of being able to trust her to REMEMBER to go outside to go potty or poop. But still. A small victory!! My puppy pooped outside on her own! It’s the simple things, right?

Chispa also helped me with some gardening last night, and discovered strawberries. Or rather, strawberry, singular. The one ripe strawberry available, she ate. She doesn’t seem to like raspberries, which is fine; Jester already lays waste to the raspberries that are at his level. She chased after weeds and clumps of dirt while I tossed them out of the garden bed, did some digging herself, and tried to investigate the handshovel I was using. Needless to say, not much gardening got done. 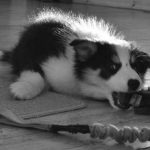 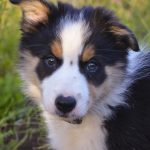 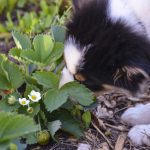 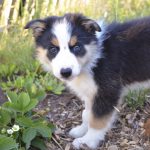 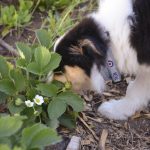 Chispa is nearly a polar opposite to Frodo as a puppy. She’s underfoot constantly. She never goes far, and when she does, she’s still alert to where I am. The Strange Situation experiment I referenced earlier when I talked about attachment and bonding theory gets played out occasionally, although without the stranger; every once in a while Chispa will have lost track of me while she’s engaged in digging a hole or rolling on a bug or something, and I’ll have moved off to do something else, although I can still see her. She’ll get up, look around in a little bit of a confused fashion, and then I’ll call her. Sometimes, it’s difficult to tell where my voice is coming from; between the agility hall, the tractor shed, and the house, sound tends to bounce around a bit. If she’s having trouble figuring out where my voice comes from, she wanders around a bit, looking even more confused. But, if she SEES me, or if she figures out the direction my voice is coming from, she comes charging over, and jumps up for a little bit of licking, tail wagging furiously, clearly happy to have found me again. We’ll play a bit, and then I’ll try to continue doing whatever it was I was doing. She’ll hang around closely, and then after a minute or so, she’ll start exploring her environment again.

I also found this, for those that are interested:

Pretty interesting stuff. I totally want to reenact this with Chispa, just to see how it goes. If/when I do, I’ll definitely get video and post it!

OK, now, on to the training!