Chispa works through Module 1 of MJSFF

Developing the Dance > Back Up

Play, play, play. I’ve never seen a puppy play so much. With me, with George, with the other dogs, by herself….play, play, play. So much playing. Chispa is very playful, super happy. Even while I’m chasing after her (yea yea I know, that’s a no no) because she’s got CAT POOP in her mouth. Don’t tell me YOU would just sit there and let this face run off with a mouthful of cat poop.

And, Chispa REMEMBERS. Yesterday I took her out to the agility hall with Frodo to hang out while we (Frodo and I) did some contact training. When finished, we left the hall, and Chispa took off toward the back yard like she REALLY had something important to do. It took me a moment to realize….oh MAN, she’s remembering where that POOP was from yesterday. Sigh. I did manage to catch up to her and grab her before she got a mouthful. Thanks Tucker. Needless to say, all my dogs get wormed fairly regularly; there’s a smorgasboard of roca for them to eat…chickens, sheep, cats…ew.

Back to happier things, even though that does make me chuckle… 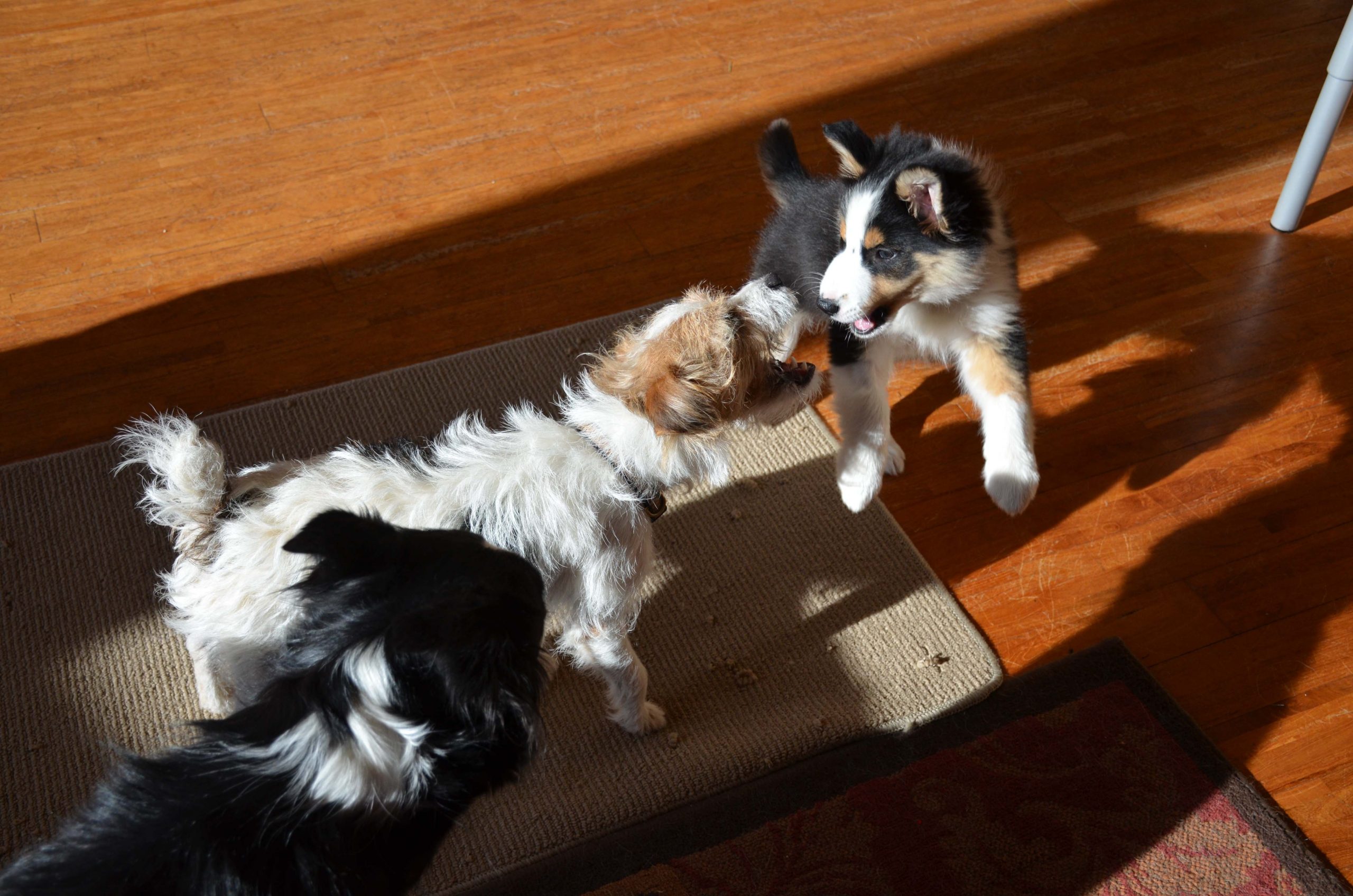 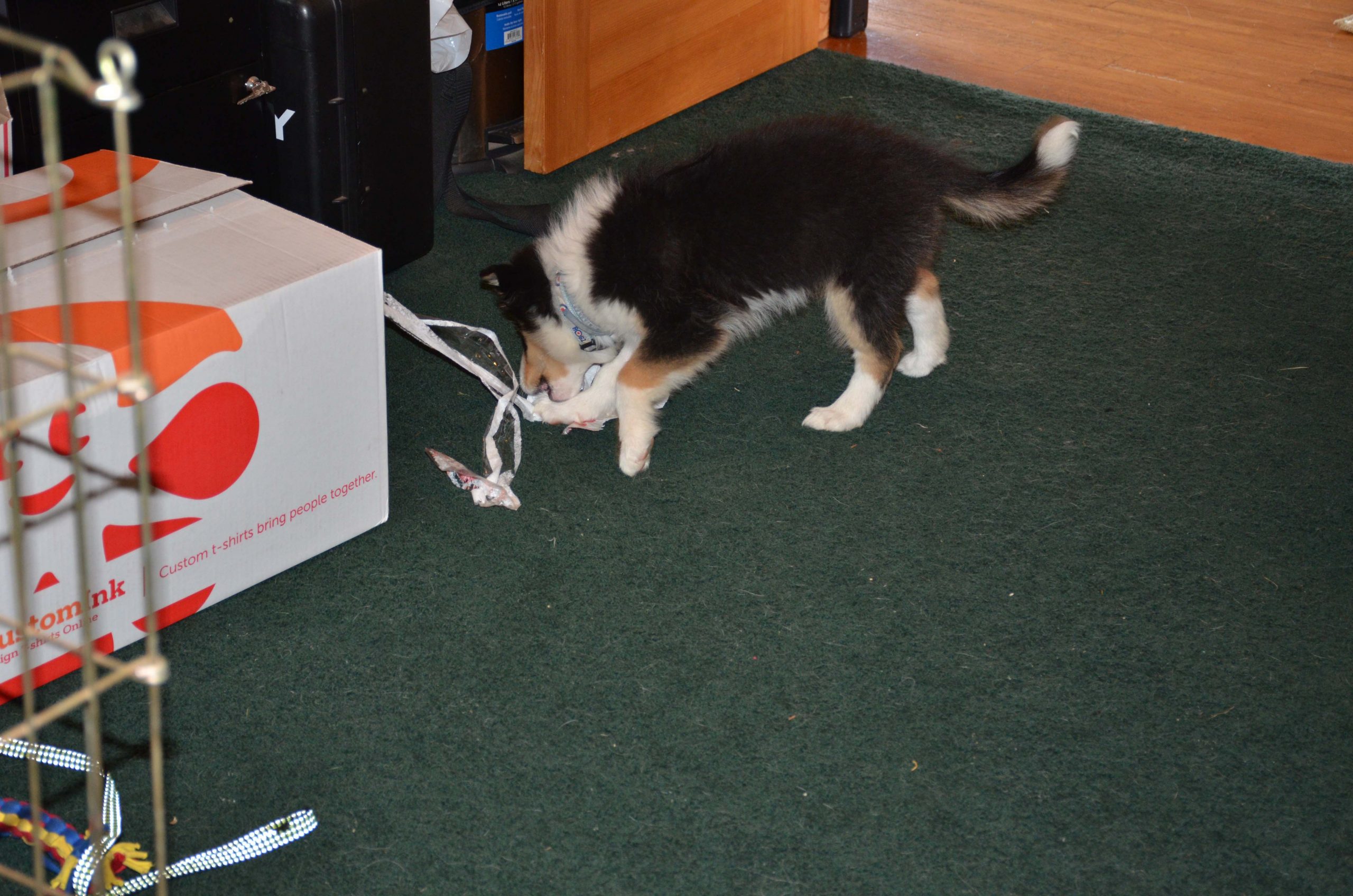 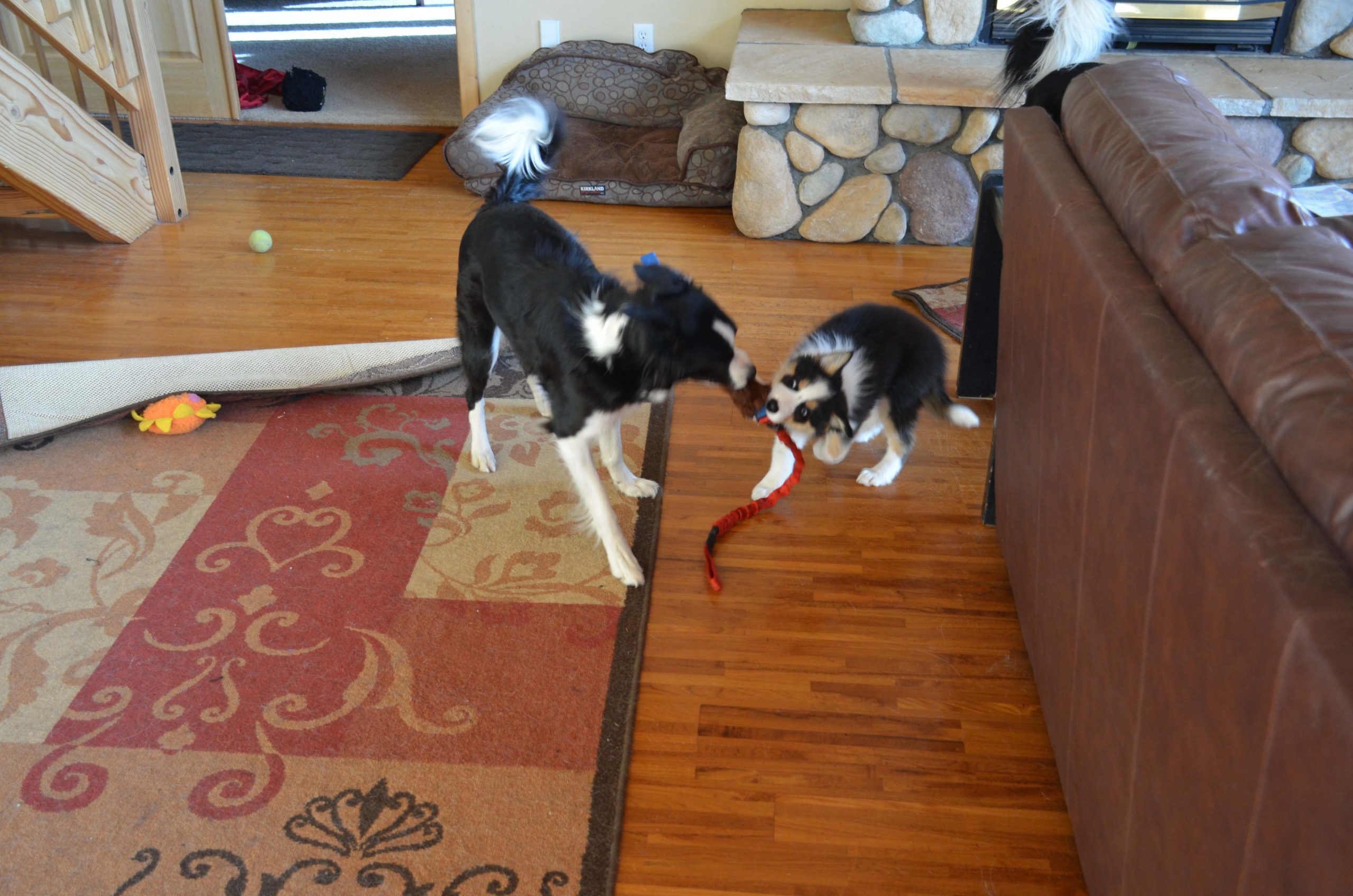 Juno doesn’t really like Chispa much, and spends most of her time showing all her teeth. I trust she won’t do anything unnecessary, so mostly, I leave them to figure things out. But I *did* catch them tugging with one another the other day. Hah! Even Juno can’t resist…

I spent a few hours the other day reformatting all the puppy handouts that premium subscribers get. It needed doing ASAP; the collection is already over twenty pages and growing, and the blog has been live for what, three weeks now? Two? Not long. At this rate, it’s going to be quite the collection when complete, if it ever IS.

Also, up to to this point, ALL of the content for premium subscribers has been available on the day of subscription. This means that you can subscribe, and get ALL of the handouts and videos on day one. That’s going to change in a few days, so that when people subscribe, they get access to the first month’s content on day one, and can read the PUBLIC parts of each post right away, but won’t get the PREMIUM content all at once, but rather month by month. Why? Well, it wouldn’t be very fair for those who have been subscribed for more than a month to have had to pay for multiple month’s worth of access, when somebody who is a NEW subscriber only pays once and gets it all. Months from now, I don’t want somebody to subscribe for $35, download six months worth of handouts and watch six months of videos, and then cancel their subscription. Doesn’t seem fair to those who got in on the ground level 😉

As far as training goes, we’re still working on food bowl manners, which are also doubling as crate manners, since Chispa is eating food from a bowl in her crate at the moment. This is for a couple of reasons: she doesn’t have the impulse control to be in the food room with all the other border collies, and will get herself in trouble going nuts for food. And, although I’m giving her a lot of food by hand throughout the day, she has the metabolism of a hummingbird and needs a couple of meals each day where she’s just EATING. And of course, she does need to know how to eat from a bowl, and with some manners. So, it’s convenient and useful for her to run out of the dog room and toward her crate in the living room when she sees me with food. She runs to her crate, gets in, faces the door, SITS, and stays sitting while I lower the bowl to the floor of the crate, then release with OK. She won’t sit long, and I can’t put the bowl down all at once; I have to be prepared to lift it. But day by day she’s getting better. She’s also gotten very smart about leaving the crate, and has even learned that sitting to get the crate door opened even works when I’m across the room – a lot better than screaming does 🙂

Today’s “new” behavior is part and parcel of some others that I want to start working on pretty soon, and ties in with an introduction to the Manners Minder, as well as rear foot targeting (you’ll see how these all tie in soon, if you don’t already).