Football and the art of the Forward Motion Front Cross

I’m not interested in discussing the “why, what, where, when” of the forward motion front cross; your timing is something you’ll need to perfect with your dog. What I’m interested in discussing is the how of the forward motion front cross.  After all, if you can’t get your body to do the correct things at the correct time, it’s not going to matter one tiny bit how perfect your timing is; you might know exactly when to do something, but if you can’t do move your body in the required fashion, your knowledge is useless.

A forward motion front cross is one where your motion (think, from the hips down) is telling your dog to go forward, but your upper body (hips up) is telling the dog to turn.  In this fashion, you can balance cues so that you let the dog know there is a turn after a jump or chute or straight tunnel, even as you are moving forward to the completion side of the obstacle.

All is not lost, though – you can balance out the cues your lower body is giving, and your changing location with some upper body cues that will let the dog know that despite your motion, you do want a turn after #3. The trick to this is that your dog has to see you initiate these cues as he’s getting ready to commit to #3. If you initiate your cues too early, your dog may discard the information as irrelevant to the #3 obstacle, because your location relative to it was too distant when you began your cue combination.  If you initiate your cues too late, your dog will almost certainly head toward and go in to the tunnel; after all, if you’re just running forward, and facing forward, and you’re moving to a landing side location, all cues say full steam ahead to the dog.

Many people get this, at least in theory.  In practice, it’s another matter.  I’m not interested in discussing the “why, what, where, when” of the forward motion front cross; your timing is something you’ll need to perfect with your dog. What I’m interested in discussing is the how of the forward motion front cross.  After all, if you can’t get your body to do the correct things at the correct time, it’s not going to matter one tiny bit how perfect your timing is; you might know exactly when to do something, but if you can’t do move your body in the required fashion, your knowledge is useless.

Most of the time, it’s helpful to think of your upper and lower body as two different parts that can balance one another out.  In this case, the lower half of the body is giving forward cues, and the upper half of the body is balancing it out. If both the upper and lower half of your body are aligned, then the cues they give will be additive (ie forward + forward = FORWARD!), but you can easily change that balance by shifting either your upper body or your lower body to give fewer forward cues.

If you’re not sure what I’m talking about, take a look at this picture: 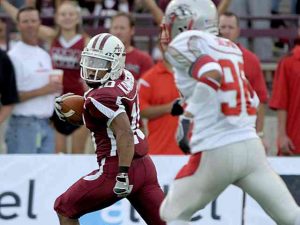 You can see that the wide receiver, who has the ball, has his lower half going forward, but his upper half is turned.  Imagine that the football player in the white uniform is  a dog; from his perspective the wide receiver’s outside arm can clearly be seen as well as the inside arm. The wide receiver is also looking over his shoulder making direct eye contact with the “dog” in the photo.

Of course, in this photo, you can anticipate that the next frame is either going to be the wide receiver rotating clockwise so he can run a bit faster, or getting sacked by the opponent.  But, in dog agility, seeing a handler moving like this has a pretty clear meaning to the dog; watch out, a turn is coming – the dog will anticipate that the wide receiver is going to continue rotating counterclockwise, particularly if the handler has developed a history of following through with such a rotation, say, in foundation work (think, recalls to heel).

I used to be in the marching band in high school and college, and to be honest, I’ve had my fill of football.  But, a couple of months ago, when I was on a plane and somebody had left a football special edition of Sports Illustrated in the seat back pocket, I was intrigued by all the photos like the one above. Each photo like this so clearly shows how to properly rotate your upper half independent of your lower half.  In football, the wide receiver is trying to turn back to find and catch a ball coming from above.  He’s also trying to avoid getting sacked.  He can’t just run forward, or he’ll never catch the ball.  And, he can’t run backward, or he’ll get sacked immediately as he’ll have no speed.  So the compromise is what you see above; lower half going forward as best it can, and upper half turned as best it can. 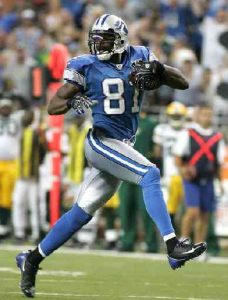 Even if you’re not built like a wide receiver (I’m certainly not!), you do have some ability to do this. Figure 3 shows an exaggerated version of what I’m talking about – this is what it might look like if you as the handler were fully extended and still trying to cue a turn for your dog. This is what rotating on the run looks like, and even if you’re not doing a forward motion front cross, learning how to rotate on the run is a very useful skill, because you can rotate your upper body in toward your dog (the football) and still cover ground quickly, cuing a turn while also staying ahead of your dog.

In the sequence above, you should be doing something like this before you pass the plane of #3. You don’t want to be so far ahead of your dog that you complete the rotation and end up standing still on the landing side of the jump; you only need to be as far ahead of your dog as the wide receiver is ahead of his opponent in Figure 2, provided that your dog has not already committed to the obstacle.  And, since you’ll be rotating your upper body but continuing to move forward with your lower body, your rotation might start before you cross the plane of #3, but it won’t end until a stride or two later (your strides), when you are on the landing side of the obstacle and can then work on cuing #4 properly.

Exercises You Can Try

For some reason, holding a jump bar or weave pole at shoulder height tends to help people get a feel for what it’s like to move the top and bottom halves of their bodies separately.  The video below shows you a couple of different exercises that you can do to help feel out moving your top and bottom halves independently of one another.

For a video that shows some nice examples of the lower body moving independently of the upper body, here you go: