Agility Around The World 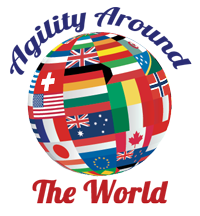 Looking for some fun challenges from around the world? Look no further than these self guided challenges with the option for some international feedback!

Anna Hinze, 2014-2016 World Agility Open German Team Member and Medalist, is back with more challenging International courses! Watch Anna attempt the courses, and watch and listen to her comments and suggestions about how to try the courses for yourself. Course maps, and over 1-hour of of video are included in each module, for a total of over six hours of video!

Join Daisy Peel and Anna Hinze, 2014 World Agility Open German Team Member, for these three challenging German courses. Watch both Daisy and Anna attempt the courses, and see their comments and suggestions about how to try the courses for yourself. Course maps, and over 20 minutes of video are included!

Test your skills! All exercises designed by German Team Coach Anna Hinze, based on courses by the WAO 2016 Judges!

German Team Coach Anna Hinze developed these sequences for the 2016 WAO Team Germany. Feel like expanding your list of things to train? Well then, time to get started! Anna Hinze & Daisy Peel practiced on these courses as well, to prepare for the 2016 WAO, in the UK in May, 2016!